From Dillion to Livingston we passed 3 interesting historical sites: Robber's Roost, Nevada City and Virginia City.
Robber's Roost is simply an old station that the stages used to stop at.  Story has it that the Sheriff and some of his men would scope out the travelers as they rested at the hotel, assessing their potential wealth.  If someone came through that looked like a good target they would alert their comrades, the bad guys, who would then waylay the stage the next day and relieve the traveler of their wealth.  It was never really proved to be the case. 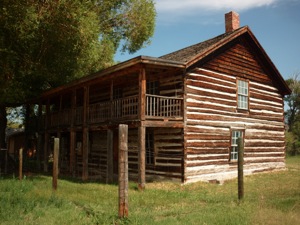 
The next stop was Nevada City where we learned about a wealthy visionary named Charles Bovey who was a collector of old buildings and their contents. Back in the 1930's and 40's he began buying buildings; lock, stock, and barrel, and moving them to Nevada and Virginia Cities. Folks donated buildings to his cause so that the buildings would be preserved instead of demolished or ruined by the elements.  Nevada City is more of a tourist trap with a museum, train station, cabins to stay in, and a few places to eat.  Virginia City is a main street lined with old buildings, some of them are businesses catering to tourists and many are mini museums where you can look back in time, seeing original, pristine, authentic goods that were purchased by Mr. Bovey.  We talked to a volunteer who comes each summer to work in the buildings. She was folding period clothing that was brand new for display in a clothing store. She said they have buildings full of stuff to stock the museum buildings with, much of it new and in the box.  I think it is very cool that a wealthy person leaves this kind a historical legacy for so many people to learn from and enjoy.  I recommend Virginia City to anyone visiting Montana! 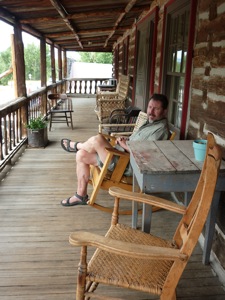 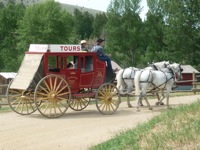 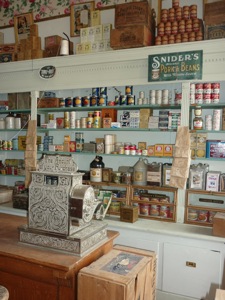 View inside an old store, all goods are originals and in perfect condition. 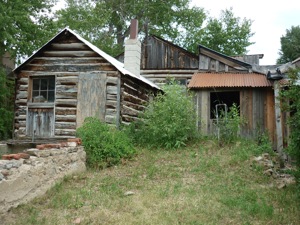 View of the back side of some of the buildings. 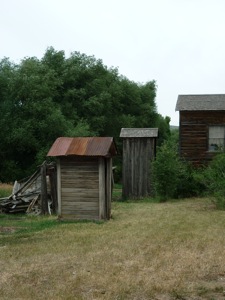 Many of you already know that those two little buildings are the old outhouses, but the one in the center is special.  It is a double decker outhouse that was once connected to the 2nd story of the old hotel.  Guests did not have to go all the way downstairs to GO!
Posted by Jill and Thayer at 9:42 PM 1 comment:

Across the Great Divide

Learned a valuable lesson today: Don't cross the Continental Divide on a steep, gravely, single lane road with no pull outs or places to turn around, in the Rialta.  The Astro? ok, no problem. The Rialta, NO!

It started out ok, but 10 miles later we were grinding slowly up the last long incline in the lowest gear with the accelerator floored.  We were both sitting on the edges of our seats, willing the rig up the last 100 yards.  I was poised to jump out and push.  As we limped up to the summit all 3 of us heaved sighs of relief.  You gotta love the Idaho DOT, there at the top was a sign that read "No RVs or trailers."  Brother.  As is usual with me I took no pictures of this part of the day.  When the going gets tough I don't take pictures. 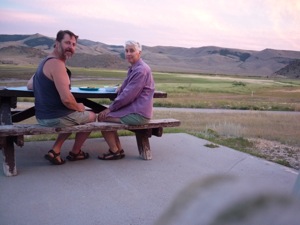 Going down was not a problem and we cruised to Clark Canyon Reservoir where we were treated to a nice free campsite above the lake and a beautiful sunset. It was a lovely finish to a somewhat stressful day.

The next morning as we were gassing up in Dillion, a guy approached Thayer and asked him if we were the RV seen going over Lemhi Pass the previous day.  Our daring reputations preceded us!

Sunset over the Clark Canyon Reservoir, and our new dining room-the great out-of-doors! 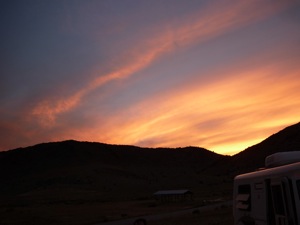 After a final morning float, we pack up and say goodbye to everyone.
We find Sunbeam Hotsprings on the shores of the Salmon River, a delightful soaking spot.  Informal pools have been made out of river rock and heated by very hot water coming vigorously out of a culvert. You just move around the pool til you find the temperature that suits you.  There is also hot water coming right out of the sand on the bottom of the pool.

We spent the night at Boot Hill cemetery, located above the ghost towns of Bonanza and Custer.  This is part of the Yankee Mining District and the Yankee River was heavily dredged in the day.  They are now trying to restore parts of the river for salmon habitat. Custer is a nicely preserved town run by the Forest Service, manned by crusty old volunteers and has a nice little museum. 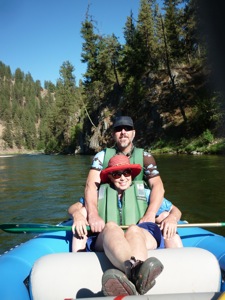 A good way to start any great adventure is to ease into it by doing something that you are already familiar with, something like rafting the mighty Payette River, just north of Boise, ID. My family has been camping and rafting here for about 20 years, staying in the same campground, enjoying the same 4 stretches of river that we've always done.  My sister Barbara, her hubby Paul and some of their friends from SLC meet us there for 3 days of fun filled rafting.  Somehow it just never gets old. We are the first of our rafting group to show up in an RV and I think I detected a few envious looks as we gave folks the tour.  It is a little weird to be on the "other side", having always poo-pooed RVs in the past! You know you're getting old...... 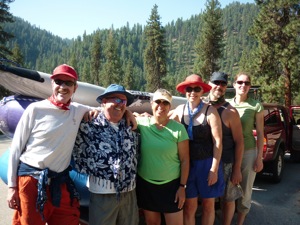 A great thing about our trips is that there are almost always some young folks along to do the heavy lifting and learn the ropes so that in a few years they will be captaining us old folks down the river.  The weekend after our rafting  trip my son Tommy took a bunch of his friends on his first organized rafting trip here at the Payette.  It has become a legacy activity!
Posted by Jill and Thayer at 5:27 PM 1 comment:

After a long day of preparation, and a last minute sale of the Blazer, we finally pull away from Bothell shortly before midnight.
Posted by Jill and Thayer at 10:22 PM No comments: