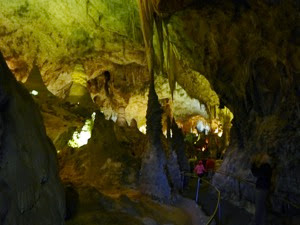 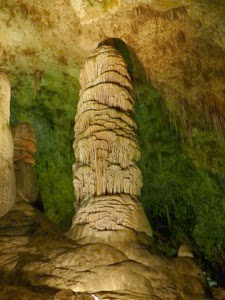 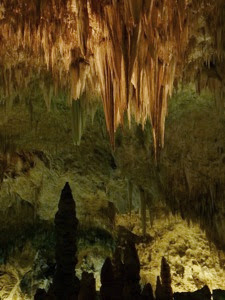 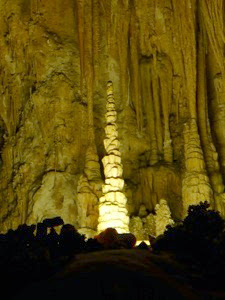 You'll have to imagine how excited we were to see something that looked like mountains again! Coming out of the flatlands and into New Mexico gave us new energy and enthusiasm, just to see those mountains. And they aren't even all that big. After getting our bearings in Carlsbad, stopping at the BLM offices and Visitor center we were ready to go. There are some BLM lands near the entrance to Carlsbad and though it was noisy with oil trucks rolling by we endured one night there.


Carlsbad Caverns were splendid beyond words, I won't even try to describe them but I'll post a bunch of pictures. I will explain a little about the unusual geology of the area. Most caverns are located in large limestone formations created millions of years ago by industrious little sea creatures like algae, sponges and shellfish. Many caverns are created by water from the surface flowing through cracks in limestone formations, dissolving the soft rock, and creating the large rooms and passageways. Then, over hundreds of thousands of years, groundwater seeping into the spaces and dripping and flowing creates the stalactites and stalagmites that make up the amazing formations, including columns, chandeliers, crystals, sheets, curtains, and everything in between. What is unusual about Carlsbad is that the major work of hollowing out the ancient coral reef was not done by flowing water, but by hydrogen sulfide rich water seeping up from  fossil fuel deposits below, reacting with the water in the limestone to create sulphuric acid. This acid ate away the limestone much faster than just flowing water and contributed to the many unusual and enormous rooms of Carlsbad. Most of the formations were then created in the usual way, water seeping into the caverns over millennia. Carlsbad is mostly a dry cavern now, there is very little dripping water, partly because is it located in a desert on a warming planet. The two and half miles of trails through the main part of the cavern are very easy and well planned and maintained. You can do side trips and additional sites for a fee but we found that two and a half miles was plenty. The NP works hard to preserve and protect the cavern and have pretty strict rules. What we really liked is that it is self guided and you can really take your time and enjoy the cave. Thayer and I had fun playing with our cameras and experimenting with different settings and effects. 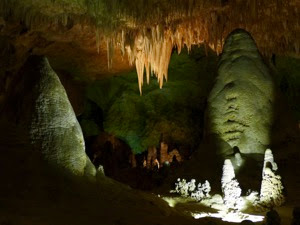 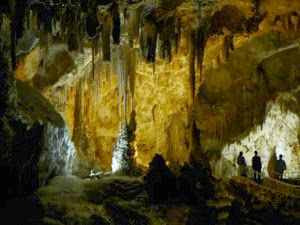 Heading back into Texas (sigh) we drove a few miles down the road to Guadalupe Mtn. NP. These beautiful, rugged mountains are made of the same limestone as Carlsbad and probably even have caves and caverns underneath. The highland areas, at 8000 ft. resemble a northwest forest rather than a desert habitat. We didn't visit this area but it looked very beautiful in the video. There are two main entrances to the park, the first being McKittrick Canyon, arguably the most beautiful place in Texas. It has a very different ecology than the surrounding areas, many plants and animals are hold overs from way back when there was more water around. A stream flows through the canyon, though you can't always see it as it goes underground for long stretches. The gray and brown cliffs tower above the creek bed and forests of pine, cactus, maple and even Texas madrone trees fill in the low areas. What really stands out is that the stream bed is filled with white boulders, all rounded and shaped from tumbling downstream during the flash floods that happen fairly regularly. These white rocks came from the cliffs above but the brown and gray coloring gets worn off on the way downstream, exposing the white sandstone. It is quite beautiful. In 1930 Mr. McKittrick built a beautiful stone lodge about half way up the canyon, above the flood areas and lived in it for many years. He donated the lodge and the property in the 60's, initiating the formation the park.

The other entrance to the park has an old farm house and barns of one the earliest white settlers in the area. Many hiking trails start near the Visitor's center. We spent the night in the parking lot that they call a campground and had a fun evening with a young couple from Seattle on a 6 week jaunt in their old VW camper. Andrew works for Homestreet Bank and Andrea works for the Seattle Parks Dept. in Environmental Learning so we had lots to talk about. We had so much fun listening to their adventures at Mardi Gras in Eunice, LA. Totally different from our experience but it sounded wild and fun! Next time we are going there for Mardi Gras!
The next morning I hiked up another canyon similar to McKittrick Canyon except it was a little more rugged with much of the trail in the empty streambed. The very best part was about 3/4 the way up where the water way wound its way down a steep stretch of canyon. It cut a slot canyon about 60 feet deep and 15 feet wide and 150 feet long, below that took several 90 degree turns, dropped into a pool, turned 90 degrees again and then flattened out. It would be awesome to see in a flood stage! 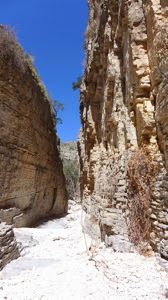 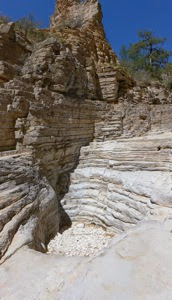 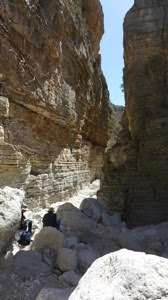 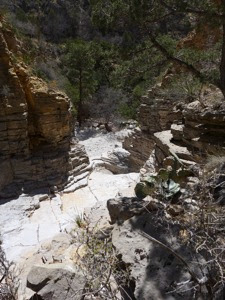 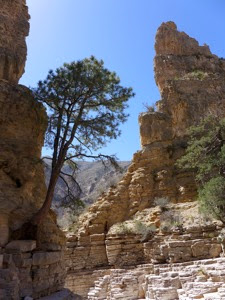 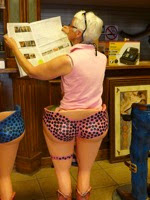 Posted by Unknown at 9:07 PM No comments:

No, we're not lost!! We just had to get through Texas!